Well, it won’t be long till we go from fun in the sun to snow removal. Years ago, the only method was for you, or your kids, to get bundled up with long johns, warm clothes, big coat, gloves, and snow boot, then head outside and get busy with the shovel. Yuck. 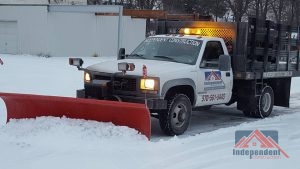 It is important to get that removed. Why can’t you just let the snow stay until it melts?

Number one reason is to prevent injuries from slipping and falling on the ice below the snow. Like the city and state use big snowplows to keep the roadways safe cars, you need your driveway and walkways to keep them safe for you, your family, and visitors.

Second, in this part of the country, letting the snow remain instead of snow removal, it could be there for six months! Not only the snow that is there from the first snow fall, but more snow will be coming, adding to it, getting higher and higher.

Today, using snow removal services for the season is much easier on the back, but there are other reasons that using a snow removal service is recommended. Amateurs at snow removal are clearing the snow away, but are they making sure the driveway and walkway are safe? Here are 5 reasons you need to consider professional services:

How do you get rid of snow fast?
If you now that snow is in the forecast, lay plastic tarps over the driveway and sidewalks, even over your vehicle’s windows. Then when you get ready to leave the next morning, you only need to allow yourself time to drag the tarp off to the side, shake the snow off and you’re clear for take-off! Isn’t it too bad that planes can’t use this method?

What is used to move snow?
Keeping a bag if salt around is hand to de-ice sidewalks and ramps, but what about the snow? There are several different tools for snow removal, making it less daunting that it needs to be, just take a look what we found:

How long does it take to plow a driveway?

An average driveway is approximately 400 feet long and with an average snowfall accumulation, removal can take an hour or less. Three-fourth of the time is clearing the area by the road and the driveway opening there. The other twenty-five percent of the time is the straight stretch.

We specialize in the most affordable roofing systems, ranging from asphalt shingle roofs to full-flat foam roofs. You'll find a variety of options to choose from within your budget!

PA110912
We offer a wide assortment of general contractor services to meet your every need. Want to finally build that man cave you’ve always talked about?
Or maybe you need an addition to make room for your growing family.

There is more to a roof than just keeping your home dry. If your roof is in poor condition, you are putting your family’s health at risk, and if left unchecked, your house will sustain severe structural damage. Whatever the case, the experienced general contractor professionals at Independent Construction have got you covered.

We are a family-owned business that relies upon exceptional customer service to set ourselves apart. We always set 100 percent client satisfaction as our leading goal across any project. Whether you need a new addition, remodel, roof, or concrete installation, you can rest assured that we will treat you and your project as a top priority. You can reach us anytime at, 570.561.9445 should you want to ask questions or schedule service.

If you want quality general contractor services, including everything from residential concrete work to commercial roofing installation, make sure to pick up the phone and give us a call today.